My journey towards Pike’s Peak continues.  I drove from Wyoming and was very happy to see the hills and trees of Colorado.  I’m sure there is beauty in Wyoming but my route did not take through it. 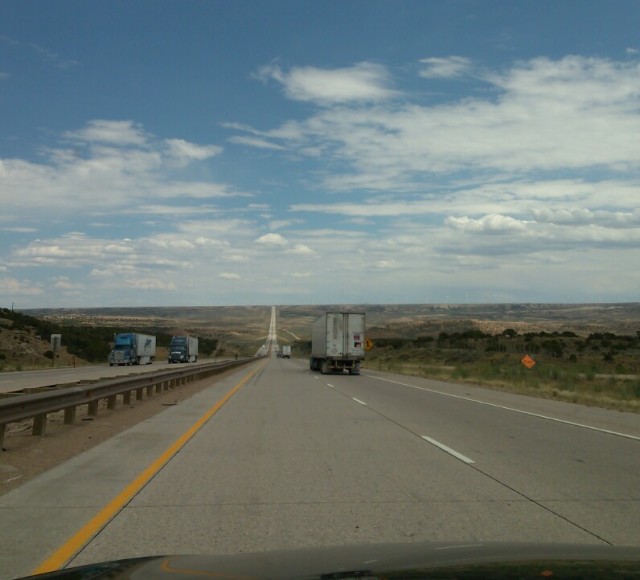 This is why I was glad to leave Wyoming.

My destination was Estes Park, Colorado.  This mountain town is tucked in the mountains at over  7,500 feet above sea level.   I took Hwy 34 to Estes Park. It was a steep, curvy, and  bordered by high rugged rock walls.  When I got close to town the rock walls pulled back like a curtain to reveal a very beautiful scene.  This town is built on the ground that was once the meeting place for Native American tribes of the area.  I can see why they picked this place.  After I had unpacked my bags and gear, I did some basic maintenance on my bike.  I wanted to make sure everything was in good working order as the next day’s ride would put me and the bike to the test. 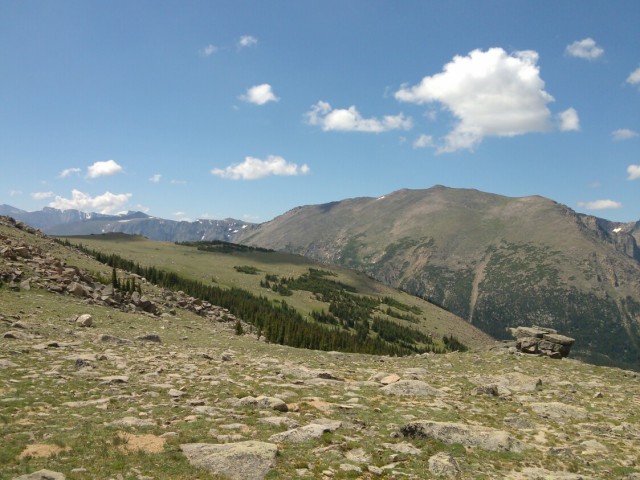 I got out of bed early as I wanted to avoid the main flow of vehicle traffic and knew I had a better chance of seeing wildlife.  I live a few hundred feet above sea level and could feel the difference immediately as I pedaled up towards the Rocky Mountain National Forest entrance.  There are two routes into the park from Estes Park, Colorado.  I took Highway 34 and planned to come back on Highway 36.  It was approximately 5-6 miles to the park entrance.  I had started at 7:30 and it was already warm enough that I was down to shorts and a light shirt.  I was serenaded by many birds that sang to welcome in the new day.  Rabbits and a variety of rodents scurried about doing their morning chores and kept a watchful eye on me as I passed.

I had my bike loaded down with just less that a gallon of water, extra clothes, food, and other equipment.  I knew that my day’s journey would end at over 12,000′ and that there was no water, food, or services other than non-water restrooms.  The weather in this part of the world can change very quickly and I wanted to be prepared for it. 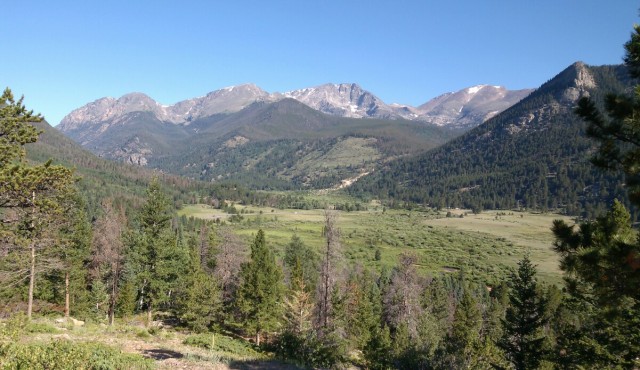 The grade and lack of oxygen in the air had me huffing and puffing.  I was passed by only two other cyclists as I ground up the mountain.  They were on bikes that likely weighed less than one of my three gear bags.  I did see more than a few people coming down the hill on mountain bikes.  They were all part of tours that will shuttle you to the top in a van then let you out with a bike to ride back down.  I must admit that it sounded pretty good to me about now.

1/2 way up the mountain taking a much needed break.

I passed a sign that stated I was now over two miles above sea level.  That sounds pretty cool until I realized I had a ways to go yet.  I stopped at a view point where many people had gathered for photo ops and a break.  I met some great people along the way.  There were a few National Forest volunteers helping folks and offering tidbits of information about the area.  I spent some time getting to know Bob Barker who was one of those volunteers.  No, not the host of the Price is Right.  As it turns out, Bob and I have some common ground.  He had long since retired as a pastor but used to preach at a Bellingham, Washington church.  This is the area that I spent the first half of my life.  We had a lot of fun talking about the college town by the bay.  I would have loved to spend more time with Bob longer but could already feel my muscles tightening up.  Onward and upward I rode.

A few miles from the summit

I saw a huge elk heard when I was at about 11,000′.  They are impressive animals and such a symbol of strength and independence.  I passed them without taking photos as they would have only appeared as dots on a hillside.

At the Rock Cut rest area

I neared the top and stopped to soak it all in.  Even with the hard work I was putting in, I was getting cold.  I pulled out several layers of clothing and was comfortable again.  After about five minutes of feeling I had accomplished my goal I looked around and saw a road that was clearly above the point where I was standing.   The elevation sign on the restroom wall read 12,090′.  I realized that I would have to drop down the mountain a ways then grind back up to where I saw the higher road.  What a cruel joke!  To put a rest area and elevation marker where I was standing was just plain mean.  I stood there contemplating my next course of action.  Oh what the hell, I thought, and headed down the hill.   I was 1/2 way up the other side when I realized this was a stupid idea.  I pushed on until I reached 12,183′ and the road dropped substantially down again.  I turned around and went back to the rest area for a break before the downhill ride to Estes Park.

I stopped briefly at the last high point before the fast ride back down.  This gate to the summit area is appropriately named Rock Cut.  I did one last check of all my gear, adjusted the mirror and waited for a long break in the downhill traffic.  I knew I would be traveling much faster than cars and didn’t want to burn up my brakes by being behind them. 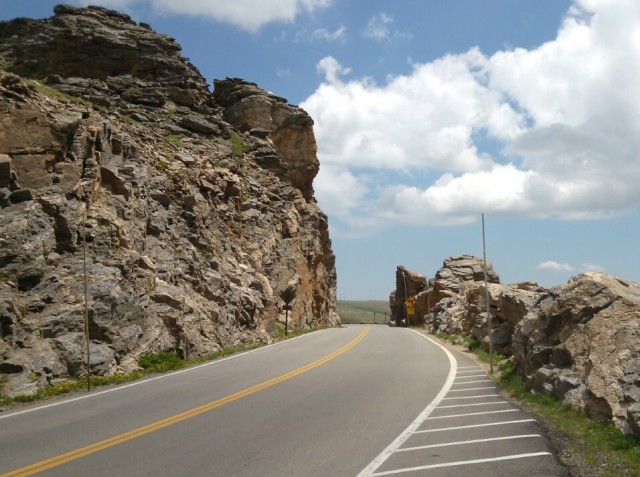 The ride down was incredible and well worth the effort.  I took the Hwy 36 cutoff and enjoyed some new scenery.  I wasn’t long and I was back down to my shorts and light shirt.  By day’s end, I had logged over 54 miles and gained and lost 4,661′ in elevation.

The Stanley Hotel in Estes Park, Colorado. This is where they filmed the movie, The Shining.

I was thrashed after the ride but felt good about the big one coming up on Sunday.  Pikes Peak will be steeper and higher but I will have less weight to carry and distance to cover.

Thanks for coming along.

Join me as I ride my mountain bike up and over the incredible mountains of Washington State. Although this blog may appear to be a testament to my accomplishments, this was not my intent. Compared to the challenges that many face every day mine are insignificant. My hope is that you will appreciate these photos and stories as you join me on my Mountain Quest. I recognize and pray for all of you that face adversity and struggle to overcome mountains in your everyday life. We all have bad experiences, excess baggage, and debris that pile up to create obstacles in our life. Much of my mountain is made up of the accumulative stress and incidents that 29 years of a law enforcement profession and life brings. If allowed to go unchecked these mountains can become impassable and will block out the sun. I challenge myself and you to face our mountains and conquer them. Even if it is one step or one pedal stroke at a time, work to overcome the obstacles that life puts before you. Push through the pain and embrace the challenges. Work to make your life and the lives of others better. Look for the beauty that this world and life has to offer you. . Carpe Diem (Seize the Day)
View all posts by Bruce Bosman →
This entry was posted in Bicycling, Colorado, Estes Park, Mountains, National Parks, Photography, Rocky Mountin National Forest, Training. Bookmark the permalink.