St Helens the day before

The May 18, 1980 eruption of Mt. St. Helens removed 3.7 billions cubic yards of material and lowered the mountain top by 1,314 feet.  This debris buried 14 miles of the North Fork Toutle River Valley with an average depth of 150 feet.  I had just graduated high school the year prior.  I remember my father telling of his experience of being enveloped by the ash cloud as he was in the Eastern Washington area when the mountain erupted.  His photos and hearing of his struggle to make the long drive home made quite an impression on me.

This bike trek would mark the first time I’ve been to Mt. St. Helens.  I was pleased to see that the weather forcast was good.  Partly cloudy and 10% chance of rain, they said.  Thursday, the day before my planned ride, was a long workday.   I left Everett southbound at 8:30 pm.   It seems that I found that 10% chance of rain.    I finally hit the pillow at 11:00 that night in a Castle Rock motel.  I started my mountain climbing earlier that I anticipated.  The bed’s mattress came to a peak in the middle so it was a fight throughout the night to stay on the summit.  I was up and preparing for the day’s journey by 6:30.   I peaked out the motel room window and was greeted by a very wet parking lot.  I mustered up some optimism and thought that maybe the day would bring that 90% chance of dry weather for me. It was a short drive to the Seaquest state campground where I parked the car.

I hadn’t even made it out of the campground before the rain started.   After carrying my raingear over 500 miles of mountain over the last month,  I would finally get a chance to put it to the test.  Under the cover of the campground check in station,  I donned my rain gear.   I recognized a weak point in my rain armor.  My shoes would soon been soaking wet.  I used two quart size freezer bag that had held my rain gear.  With a couple rubber bands holding the bags on my shoes I started pedaling towards Mt. St. Helens on the Sprit Lake Highway.  I found that the rain gears efficiency at keeping the rain off me was equaled by its ability to keep the moisture in.  I was a moving, human terrarium.   My rain pants worked well but made me work harder to pedal as they were tight and restricted my leg movement.  I was very glad when the rain lightened up 90 minutes up the road and I packed my rain gear back in my bike bags.  It was still cold enough that I wore several layers of clothing over my bike shorts and shirt.

I passed through the town of Toutle and followed the river of the same name.  There is still much evidence of the 1980 eruption.  The river cut back down through the very thick layer of volcanic ash that appeared to be over 40 feet thick in some spots.  It was amazing to me how life had returned to these devastated areas as trees and wildlife flourished around me.  The road was a slowly increasing grade and I found it manageable to maintain a good pace.  I knew it was important to maintain that pace due to my delayed start.  I had 92 miles to cover and did not want to get back home too late.  I stopped to take a photo of a bridge and saw that I would soon be in the cloud layer which was barely above me.

Bridge into the clouds

I was passed by two of the only other bikes out this day.  These two Portland women were on road bikes and wore typical bike shorts and a thin long sleeved shirt.  Even though working hard to climb the grade will keep a body warm I thought that they were very underdressed for the elements.  I caught up shortly afterwards and joined them for a break at the 2,000 foot marker.  We were now in the clouds and it seemed that is where we would be for the rest of this trek.  I parted ways with my fellow bikers five minutes later.  Even though our destination was the same I would not see them again.  I have to admit that I was tempted to quit several times myself on this trek.

Riding in the thick cloud layer can be a very strange experience.  There was very little traffic and other than the sound of my breathing and tires on pavement it was eerily quiet.  There were times when the cloud layer was so thick that I could barely see across the road.  It seemed that I was floating in the cloud as I traveled over many very high bridges that had short sides.

I was glad to see a 3,800 foot marker as I knew I would be at the top at 4,210 feet.  What I didn’t know before this point was that the road dove back down to 2,500 feet over the next several miles.  When I was planning this trip,  I traced the route on Google Earth and checked for significant elevation changes.  It seems that I had skipped past this very significant five mile section.  As I descended very rapidly I muttered, “Oh crap.”  This phrase was repeated as I gained momentum and realized this hill would be a very big obstacle upon my return trip.  The road bottomed out in the area of Coldwater Lake which is approximately six miles below the Mt. St. Helens National Park Visitor’s Center.  For the next mile the roadway was covered with very small frogs.  I stopped to drink some water and was greeted by a chorus of the little hoppers.  I found it impossible to avoid them all as I rode through though this froggy area.  I was thankful that I had fenders between my bike tire and my face.

I gained 1,710 feet of elevation over the next five miles which tested my mental fortitude.  The temperature dipped substantially as I reached the visitor’s center.  Other than a few short stay tourist visitors I had the place to myself.  The visibility was still 50 feet at best and I was unable to see any of the mountain.  I sat down to enjoy a meal of beef jerky, dried fruit, and Gatorade.  I seemed that the spot I chose to sit down and take a break was the ideal spot for people to use as a backdrop for photos.  It gave me an opportunity to some interesting people.  I find it entertaining to see how differently people react when they realize someone rode a bike up a mountain that they found hard to do in a car.  Older women typically have a look of concern and pain as they talk to me.  I usually get the good job look from guys.  Little children and drawn by a desire to check out this guy dressed in funny neon green and the need to touch my bike.

St Helens from Johnston Ridge on a Clear Day

My break was very short as it was almost 3:00 and I had a lot of road left to do on a bike and in the car before I was home. 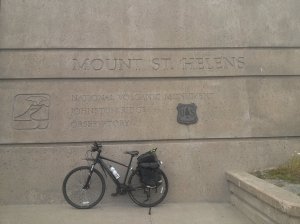 Giving my Bike a Rest

I pulled out my snow boarding style face mask and throat protector.  Once I was bundled up I hit the hill.   The low temperature and wind chill made it a bit uncomfortable.  I tried to pedal in an effort to generate some heat but I was traveling fast enough to render the pedals useless.   I was a little concerned that my body shaking from the cold was causing my bike to wobble a bit.  I was glad to get to the bottom five miles later where it was a bit warmer and I could work my body into a warmer state.  I made the climb back out of Coldwater Creek bottom and was soon comfortable again.   This climb that I had dreaded earlier was now the reason I was warm again.

I stopped halfway up that hill as I heard an inviting sound.   It was the distinctive bugle of a bull elk.  He was down in the Toutle river basin.  The clouds had parted and thinned enough that I could see the canyon area where he was.  This brought back many fond memories of chasing elk through the mountains with a muzzleloader in my hands.   I wished that I would have had a reed and bugle tube as I would have loved to call the bull in for a closer look.  I was content to hear him and another bull farther down the valley challenge each other for the right to run the herd and rule this mountain.  It must be sign of getting older that I would now rather capture the elk on a camera rather than with a firearm.  Moments like this are what drives and inspires me on these treks.

I picked up the pace after passing the 3,800 foot maker.  I made it back to the car at Seaquest Campground just before 6:00.  I had logged 92 miles on my bike this day which is a bit too much when you add in the elevation gains that came with it.

After over nine hours of bike seat time I was very glad to be off of it.  I cleaned up, changed clothes, and started the long drive home.  I will definitely have to go back to Mt. St. Helens again so I can enjoy the views when the weather is better.  Next time I think I’ll check out this nountain on four wheels.

Join me as I ride my mountain bike up and over the incredible mountains of Washington State. Although this blog may appear to be a testament to my accomplishments, this was not my intent. Compared to the challenges that many face every day mine are insignificant. My hope is that you will appreciate these photos and stories as you join me on my Mountain Quest. I recognize and pray for all of you that face adversity and struggle to overcome mountains in your everyday life. We all have bad experiences, excess baggage, and debris that pile up to create obstacles in our life. Much of my mountain is made up of the accumulative stress and incidents that 29 years of a law enforcement profession and life brings. If allowed to go unchecked these mountains can become impassable and will block out the sun. I challenge myself and you to face our mountains and conquer them. Even if it is one step or one pedal stroke at a time, work to overcome the obstacles that life puts before you. Push through the pain and embrace the challenges. Work to make your life and the lives of others better. Look for the beauty that this world and life has to offer you. . Carpe Diem (Seize the Day)
View all posts by Bruce Bosman →
This entry was posted in Bicycling, Mountains, Mt. St. Helens, Photography, Volcano. Bookmark the permalink.